Cocoa Controls: Who are you? What do you do?

Daniel Amitay: Hey there, I’m Daniel Amitay. I live in NYC and am currently working on the SleepBot app for iOS. I am probably best known for Big Brother Camera Security, which spent some time in the Top 25 Overall, was banned by Apple and then unbanned 21 months later.

There isn’t much of a common thread in all the things I do aside from wanting to push my limits: a face-capturing security app; an iOS app detection library; a keyboard dismissal component. Right now SleepBot fits that bill: motion tracking, sound tracking, sound recording and smart alarm for 7+ hours without memory issues or crashes. I’ve learned to love Instruments.

DA: Unless it is the sort of app that needs a quick launch time (Camera, Calculator, Phone), my apps get filtered into relevant folders. It isn’t the prettiest sight, but it gets the job done, and done well. 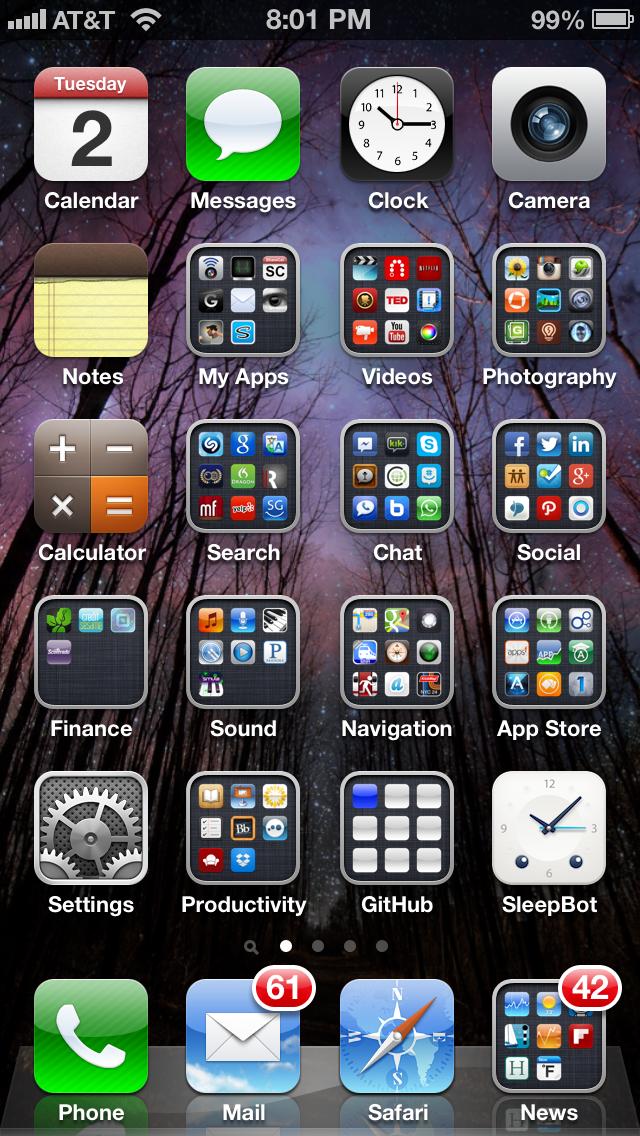 CC: How, why, and when did you become an iOS developer?

DA: As a result of one of my engineering courses in 2009, I set out to create an infrared hardware accessory for the iPhone—the idea being to use your iPhone as a universal TV remote. They exist now, but at the time I was soldering diodes and sensors, only to reach a point where there was no software to receive, store, and transmit the infrared data. My skills didn’t develop quickly enough at the time to complete the hardware project (and there was no iPhone external accessory program then), but I was quickly hooked on Objective-C.

CC: What’s one mistake you’ve made that you won’t make again?

DA: Being careless with analytics. For my security app, Big Brother Camera Security, I wanted to uncover the most commonly used passcodes so as to create a blacklist in future versions. Some were obvious, and others were unthinkable. I considered this information to be technical seeing as there were only ten thousand possible combinations (for hundreds of thousands of users), the app was explicitly intended as a lock screen replacement, and the data was completely anonymous.

I released a blog post detailing the data I discovered, which was quickly picked up by numerous blogs and news agencies. Eventually the articles made it to Apple, who didn’t agree with my classification of “technical data,” and removed the app within the day. It took me over twenty-one months to get Big Brother back on the App Store—all because I wrote a blog post.

CC: What’s the best decision you’ve ever made with your software development career?

DA: GitHub by far. Viewing the code of other developers is a great way to learn new tools and best practices. Going a step further and actually contributing code to open source then conditions you to write more organized and efficient code everywhere. I say GitHub because the key isn’t Git: it’s the sharing of your own code, having others contribute to it and show how to improve it, as well as contributing to the code of others.

DA: SVPullToRefresh is my favorite example of open source code—specifically as a category as opposed to a custom class. If you want to teach someone to write awesome components with a sensible structure, it’s the component to look at. Two of my components consisted of a variety of UIScrollView subclasses until I learned about Associated Objects from SVPullToRefresh. I have not used it in production code, but it has been the most valuable educational tool to date.

CC: What else should we know about you?

Unlike a few more awesome iOS developers, I can’t design my way out of a CGRect. Rather than embarrass myself, I try to be as minimalist as possible for my personal apps, and insist on working with a professional designer for everything else. We all know that design has become more important on mobile lately, and I have a lot of respect for those who can code and design.

CC: Congrats on getting Big Brother back into the App Store! Can you shed any more light on the process? Did you reach out to Apple, or they to you? Or was it total radio silence for 21 months until you unexpectedly received a Ready for Sale email?

DA: The 21 months involved in getting Big Brother back into the App Store consisted of 13 separate rejections with 8 unique reasons, with each submission trimming features off of the app. I did what I could to reach out to higher positioned employees and execs, but was consistently re-directed to the standard Review Team information. The only advice that can be given is to avoid such a scenario at all costs, because once you end up on Apple’s hit list, you feel it.

Before my blog post, review times for Big Brother were consistently 10 days or less with acceptances. Afterwards, each review took well over 1 month, and was always hit with a terse rejection. Communication from Apple was always terse and polite, but being that developers have to play by their rules, it isn’t easy to get a dialogue going.

CC: Do you ever do any iOS consulting or contracting? How has the past success of your apps affected the rate at which prospective clients reach out to you?

DA: I do consult when I have the time and the project is interesting, although I prefer to work on my own projects and on longer term projects with some awesome people I know. In terms of prospective clients, I have actually found that my GitHub and App Store work has lead to more contact from startup founders and recruiters than anything else.

CC: Also, it’s a big accomplishment to succeed in getting your app into the top 25. I was lucky enough to have my very first iPhone app peak at #5 in the App Store’s paid list once, but that was all the way back in the Fall of 2008. Do you have any recommendations to developers on how to improve the visibility of their apps and get more downloads?

DA: Big Brother hit #16 Overall Free in May 2010, so it was also a while ago. Big Brother sales grew on the back of two specific points: it used the front-facing camera, so iPhone 4 sales were important; and slow (yet consistent) word of mouth: it was the sort of thing that people liked to show their friends. Making something that people like to share will get you rankings (although not necessarily money or retention!).

Check out all of Daniel’s Cocoa Controls components.

Have a suggestion for whom we should interview next? Let us know at [email protected].